Due to the Covid-19 crisis, all shows and fun have been cancelled until further notice. Feel free to browse past events to remember the good old days. 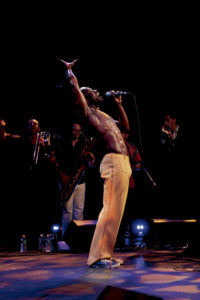 “Fela! the Concert” is comprised of members of the cast and band of FELA! the musical. Individually, the musicians are some of the finest in New York, having performed with The Roots, India Arie, Elvis Costello, and many others. Lead singer Sahr Ngaujah was nominated for a TONY Award for his performance in the Broadway show and has been featured on film and television.

Can’t be beat: The awesome musical about the life of Afrobeat pioneer Fela Kuti, “Fela!” comes to Coney Island as a free Summerstage concert on July 26.